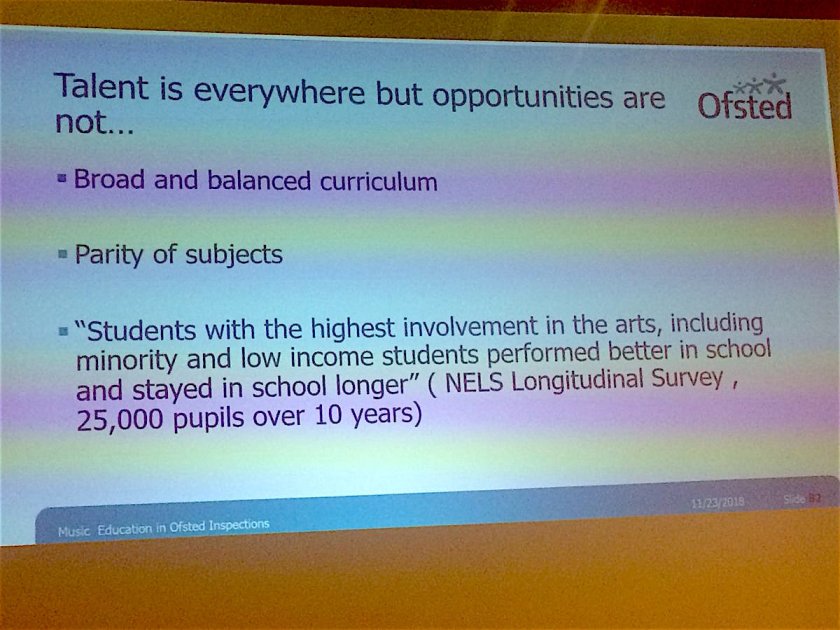 At the Music Mark conference in the UK in November 2018, Susan Aykin, National Lead for Visual and Performing Arts at Ofsted (the English government’s education inspectorate), used the following quote as part of her presentation:

Students with the highest involvement in the arts, including minority and low income students performed better in school and stayed in school longer (NELS Longitudinal Survey, 25,000 pupils over 10 years).

We thought that delegates and others might like to know the source of the study, so here’s a summary.

What was the NELS Longitudinal Survey?

The Study was managed by the National Center for Education Statistics at the Office for Educational Research and Improvement, United States Department of Education.

The study concluded in 2000, after five waves of data collection, when participants had reached age 26.

What does it tell us about the impact of music participation in young people?

There is no definitive report about music participation over the ten years, but various reports have drawn out sample data. The most powerful evidence about music is from NELS’ own summary after two years – but we can find no follow-up analysis of these particular findings:

Another report in 1999, referencing the 10-year study, highlights that students who report consistent high levels of involvement in instrumental music over the middle (age 11 to14) and high school (age 14-18) years show “significantly higher levels of mathematics proficiency by grade 12” (age 17-18) – regardless of students’ socio-economic status. They found that, of low socio-economic status students who exhibited high math proficiency in the 12th grade, 33% were involved in instrumental music compared with 15% who were not involved. They also found that the differences in those who are involved with instrumental music vs. those who are not is more significant over time. This data is also referenced in Dr Susan Hallam’s research synthesis, The Power of Music.

Catterall, James S., Richard Chapleau, and John Iwanaga. “Involvement in the Arts and Human Development: General Involvement and Intensive Involvement in Music and Theater Arts.” Los Angeles, CA: The Imagination Project at UCLA Graduate School of Education and Information Studies, 1999. This report is also featured in a collection of studies called Champions of Change – the impact of the arts on learning, published in 2002.

A review of cultural education in England by Darren Henley, current Chief Executive of Arts Council England and previous managing director of radio station Classic FM, also references the study. It also points to the maths connection, relating this and findings from other arts, to low income students: “Low-income students involved in band and orchestra outscored others on the NELS math assessment; low income students involved in drama showed greater reading proficiency and more positive self-concept compared to those with little or no involvement.”

The findings up to that date relating to the arts (but not specifically music) have been summarised in the report, National Endowment for the Arts report: The Arts and Achievement in At-Risk Youth: Findings from Four Longitudinal Studies and are further summarised as follows: